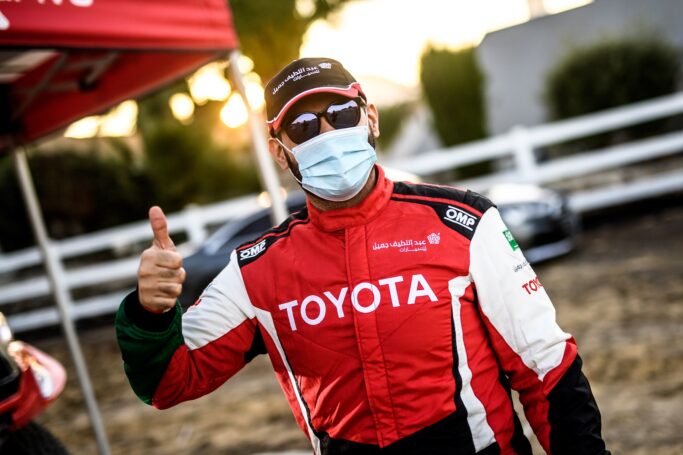 Yazeed Al Rajhi and co-driver Dirk Spain: We have done our first preparation for the biggest challenge in the rally raid world, Dakar 2021 at Andalucia Rally.

VILLAMARTIN (SPAIN): Yazeed Al Rajhi and his co-drive Dirk von Zitzewitz completed the first full Rally of the competition at the 2020 Andalucia Rally after the COVID-19 global pandemic that broke out at the beginning of the year. The Rally was held in Villamartin, the inaugural Andalucia Rally in southern Spain on Saturday.

The Rally which was a “substitute” for Rally du Maroc which was canceled as a result of the Covid-19 pandemic has succeeded holding it the first time.

Very much a day of re-adjusting to rally competition following the many months away from competition the Saudi motorsport icon and his German co-driver are delighted for the top level they have reached in the Toyota Hilux until the last stage of the Rally, especially for Dirk who made his remarkable comeback beside the Captain as a navigator.

The reigning champion of the local Saudi Toyota Desert championship, Yazeed and Dirk showed a strong and stable performance in both driving and navigational as the team did not encounter any navigational nor mechanical failure. Homeland boy was leading the overall standings of the Rally until a tiny mistake from the navigator has caused the team 10-minute penalty cost a potential victory after the third stage, Al Rajhi reached the finish 7min 17sec behind runner-up Carlos Sainz.

However, Andalucia Rally utilized all the necessary safety protocols and became a superb shakedown arena for teams making preparations for the forthcoming Dakar Rally.

What a superb preparation from both involved breathtaking performances,

Yazeed drove superbly to defend his first position until the stewards dropped penalty points against him and, Dirk has done an astonishing navigation for all 4 stages.

On the other side, the Saudi motorsport icon, Al-Rajhi, extended his thanks, appreciation, and gratitude to the official partner, who represents a strong boost to him in his global and regional participation, Abdul Latif Jameel, and for the support he receives from the ideal partner.

Yazeed Al Rajhi:” first of all, I’m very happy that I’ve returned behind the wheels after a long break due to the coronavirus pandemic, It was a fantastic 4 stages, we had a suburb preparation for me and Dirk who have done a great job in his first return”

“Our essential goal is to prepare very well for Dakar 2021, we are pleased and relieved that we have got this rally in Villamartin, I would also like to thank the organizers who succeeded in organizing the new Andalusia Rally”

“I am very happy with our amazing performance. Andalusia was the first stage of our preparation and it will not be the last, and we will continue to continue our preparations and equip ourselves until next January.” He added.

Dirk von Zitzewitz: “I’m overjoyed to come back to my seat next to my friend Yazeed Al-Rajhi. We have been very positive and happy since the day we reached Villamartin to prepare for the Dakar Rally and, today we are happier than before. I was on a long journey of recovery after the accident since last year and today is an unbelievable day for me.”

“Everything went well although we were been given a 10 min penalty from the stewards because of me in the third special stage of the rally, which made us lose our first place in the overall standings. It was a good lesson for me for a preparatory rally here at Via Martin, we will continue our preparations to learn from our mistakes and prepare for Dakar Rally 2021” he added.