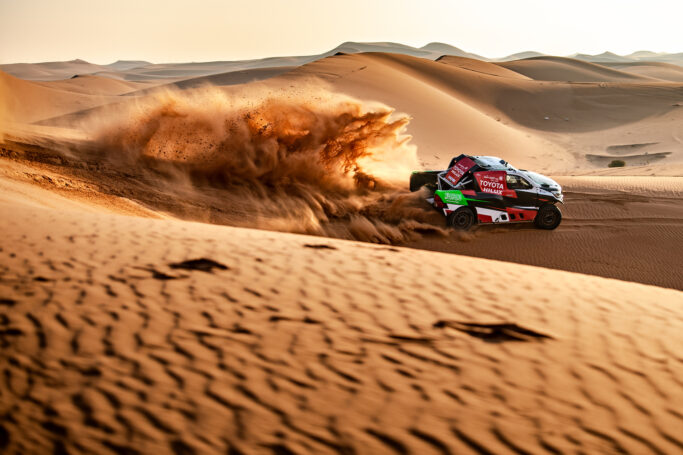 Mr. Hail “Yazeed Al Rajhi” is all set for the final two rounds of Baja Hail 2020

The reigning champion of Saudi Toyota, Al Rajhi, and his German navigator Dirk von Zitzewitz are well prepared for the 2020 FIA World Cup for Cross-Country Bajas final two rounds which are running under “Hail Rally Toyota 2020” will reveal the identity of the winner on December 11-12 and 15-16.

HAIL (Saudi Arabia): We head to another eager adventure but this time It’s not abroad where we fly through the international airport. On the contrary, the international event will arrive in the north-central part of Saudi Arabia in Hail as local hero veteran driver Yazeed Al Rajhi is pleased to welcome again other rounds of the FIA World Cup for Cross Country Bajas at his homeland.

The Overdrive duet is excited to compete in the latest version of the 2021 Toyota Hilux which has one major change a striking new front design and some improvements to the suspension and its V8 engine to encourage competitive driving among the participants.

This is not the first time Saudi Arabia to host rounds of the FIA International Cup for Cross-Country Bajas rounds as Hail been in the history of the world cup many times, Hail always been the largest sporting event of motorsport in the region where fans and competitors from inside and outside the country await to come and participate every year since its birth in 2006.

Due to Hail’s geographical location, the region is well known for its famous desert in the Arabian Peninsula alongside its well-known dunes the “Dunes of the Great Nafud. However, February 2008 was the first year Saudi Arabia to host its first-ever world championship motorsport event as Baja joined the FIA international calendar as the opening round of the six-round FIA International Cup for Cross-Country Bajas.

In 2009, a local hero and rookie Yazeed Al Rajhi romped to victory in his first appearances in a cross-country rally on a four-wheel drive-vehicle. In the following year, Mr. Hail never stopped winning and obtain his second victory on his home soil. The veteran has the most wins in Hail and the only Saudi with five victories (2009, 2010, 2012, 2015, and 2016) and with different manufacturers the reason why his populace calls him “Mr.Hail”.

Yazeed Alrajhi: “Hail is close to my heart as it is one of the most local famous rallies that I won several times on home soil with different manufactures of the” T1 ” class since 2009. I love its people, its picturesque nature, and its terrain, which is one of the most difficult paths that make you challenge yourself the most,”

“After our participation for Dakar in the Andalucia Rally last October, we have recovery our physical and mental training after we witnessed the rally stopping for 7 months due to the COVID-19 pandemic.”

“Our next stop is very important, and I believe in the power and capabilities of the Hilux especially after it has been reinforced, its performance is reliable. It suits the challenges that we are looking to gain from the desert, especially from sand dunes, as the Dakar Rally 2021 will consist of sand dunes in a large proportion next year. In any case, we are looking forward to an exciting rally full of adventures.”
Hail will be witness an average low-temperature with average temperature varying between 5°C (41°F) and 17.2°C (63°F) as December is the first month of the winter in Saudi Arabia.

Talking about the weather, Yazeed is very familiar with Hail’s cold climate and he said:

“Of course, the temperatures in Hail will be very low as we have experienced the similar weather at stage five in Dakar 2020 last year and this is another challenge for us to gain before the start of Dakar 2021 because usually, the date of the Hail Rally is after the Dakar Rally in February or so and it’s the last month of the winter in the kingdom”

“Anyway, we looking forward to a wonderful two rounds of Baja hail rally and a lucky journey as I also would like to thank my strategic partner Toyota and Abdul Latif Jameel Motors,” Yazeed added.

On the other hand, Dirk von Zitzewitz is delighted to be a navigator for Yazeed for the first time in Hail and in the kingdom of Saudi Arabi, generally.

Dirk Zitzewitz: “I’m very excited and looking forward to Baja Hail although It won’t be the first time to be in the kingdom as I have been alongside Yazeed as a consultant last year in Dakar 2020,”

“I have the same excitement which I had for the Andalucia Rally last October, this one will be special for me as it will be the first time to race in Saudi alongside with home hero Yazeed Al Rajhi”

“I have been in Hail with Yazeed last year while competing in Dakar and I have seen Hail, It’s an impressive town and it’s in a very beautiful area around and I’m excited to visit it again and communicate with its local people closely,” said Zitzewitz.