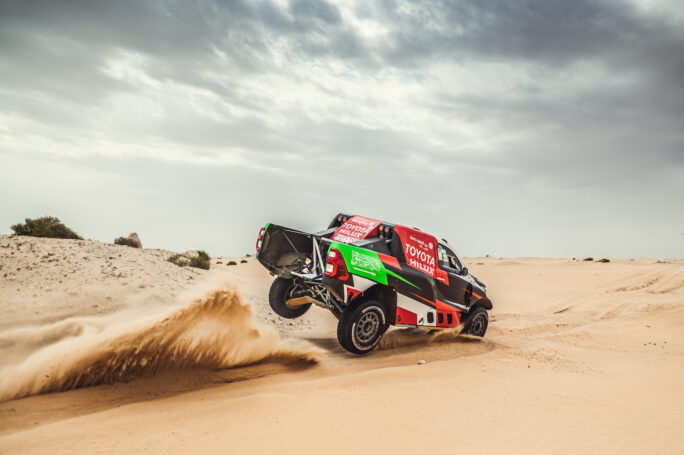 Saudi driver Yazeed Al Rajhi and Irish co-driver Michael Orr are set to take on the challenge of Sharqiya International Baja Toyota this weekend’s third round of the 2021 FIA World Cup for Cross-Country Bajas.

Sharqiya (KSA): Saudi motorsport icon, Yazeed Al Rajhi, is set to participate in the third round of the 2021 FIA World Cup for Cross-Country Bajas, Sharqiyah International Baja Toyota which will take place at Eastern Province’s desert and at the seashore on March 3th-6th.

Al Rajhi striving to win the first edition of the Sharqiya International Baja Toyota which has joined the FIA World Cup for Cross Country Bajas this year, the rally is also hosting the opening round of the 2021 Saudi Toyota Desert Rally Championship.

The Saudi motorsport Icon, Al Rajhi who recently won Dubai International Baja is striving to win the first edition of the Sharqiyah International Baja Toyota as well as defending his title of the Saudi Toyota Desert Rally Championship as he triumphed at the inaugural Sharqiyah Baja and the Championship. In 2020, the Saudi Toyota Desert Rally has been canceled due to a coronavirus pandemic.

Yazeed Al Rajhi: “I am fully prepared to compete in Sharqiya International Baja Toyota which joins for the first time the FIA World Cup for Cross Country Bajas. I am very happy to see my country hosting the different motorsport events one after the other, whether it’s rallies or other championships.”

“I love Sharqiya and its terrain just as I love its people and I am happy to come back to compete at it. Sharqiya is close to my heart, as I triumphed my first local championship title on home soil in 2019 with Toyota Hilux as Michael Orr was my co-driver.”

I’m looking forward to win Sharqiya again and to be at the top, whether at the international or national level.

“Well, nothing is impossible in rallies you may expect surprises and difficulties, but we will push and do our best to achieve our goals.”

“I believe our Toyota Hilux’s performances were impressive in Dubai and gifted us a win with a very comfortable margin.”

“In Fact, we’ve witnessed a fierce competition in 2019 with Carlos Sainz and that’s what we will miss this year but I’m sure we will repeat it again in the future”

Besides that, Michael is super excited for Sharqiyah International Baja Toyota this year having won here in 2019 with Yazeed.

Michael Orr: “This will be the second time that I participate in Sharqiya Baja alongside my friend Yazeed Al Rajhi.

“We won here previously, and our goal is to push and win again. We had a fun and wonderful Baja in Dubai. We came back with a big victory and we hope to repeat it here in Sharqiya’